Ongoing housing shortages and rising home prices are prompting international buyers to pause in their recent homebuying sprees in the United States. International sales in the U.S. totaled $121 billion from April 2017 to March 2018, a 20 percent decline from a year ago, the National Association of REALTORS® reports.

Foreign buyers and recent immigrants accounted for 8 percent of existing home sales, a decrease from 10 percent during the 12-month period that ended March 2017, according to NAR’s 2018 Profile of International Transactions in U.S. Residential Real Estate.

“After a surge in 2017, we saw a decrease in foreign activity in the housing market in the latest year, bringing us closer to the levels seen in 2016,” says Lawrence Yun, NAR’s chief economist. “Inventory shortages continue to drive up prices, and sustained job creation and historically low interest rates mean that foreign buyers are now competing with domestic residents for the same, limited supply of homes.”

Five countries comprised nearly half-49 percent-of the dollar volume of purchases by foreign buyers: China, Canada, India, Mexico, and the United Kingdom. China-for the sixth consecutive year-continued to have the largest dollar volume of purchases. Still, Chinese buyers’ involvement in the market decreased; they purchased an estimated $30.4 billion in residential property in the U.S., a drop of 4 percent from last year. 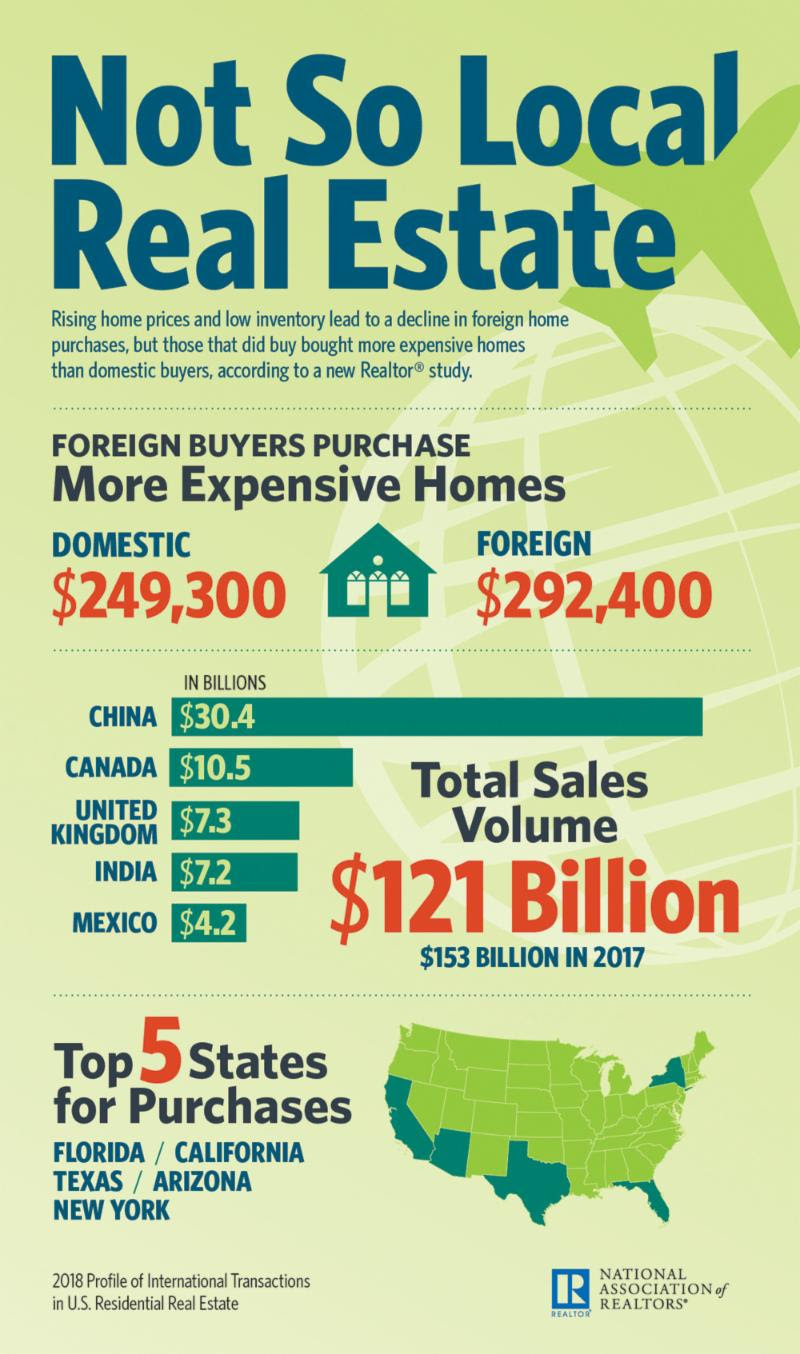 CLOSED SALES REACH $1 BILLION
“July was a great month for pending and closed sales,” said Mike Hughes, Vice President and General Manager of Downing-Frye Realty. “We closed over 275 transactions in July, and had over 230 pending sales with 169 of them priced below $500,000. We have now closed over 1,950 transactions for the year. On the last day of July, our closed sales volume went above $1,000,000,000.00 for the year. We opened a small office on Marco Island in March 2017. Our Marco closings are up 53 percent so far this year. The next five months will only add to this number. We are very pleased with how well the Downing-Frye brand has been received on the island.”

BONITA /ESTERO: STEADY MARKET INTEREST
Inventory for both single-family homes and condominiums showed an overall one percent
increase over July 2017. The active inventory in June 2018 was 1,539 units. While single-family homes showed a 5 percent increase in inventory specifically, condominium inventory has dropped off slightly. Overall, the Bonita Springs and Estero markets showed a slight decrease of 3 percent in pending units and a 4 percent decrease in closings for 12-month June-ending figures. The median price remains steady, while the days-on-market has increased by 11 percent, most likely due to steady price repositioning throughout the year. There were 209 pending sales in June 2018, down 12 percent from June 2017, and 279 closed sales, down 11 percent compared to June 2017. The median closed sales price remained relatively the same at $293,000.

FLORIDA: RISING MEDIAN PRICES
Florida’s housing market reported rising median prices, fewer days to contract and a continuing tight supply of inventory in June. Sales of single-family homes statewide totaled 27,836 last month, down 1.3 percent compared to June 2017. The statewide median sales price for single-family existing homes was $260,000, up 6.1 percent from the previous year. For the townhouse-condo market, statewide closed sales totaled 11,128 in June, up 1.2 percent compared to a year ago. For-sale inventory in June remained tight, at a 3.9-months’ supply for single-family homes and 5.5-months’ supply for townhouse/condo properties. According to Freddie Mac, the interest rate for a 30-year fixed-rate mortgage
averaged 4.57 percent in June 2018, significantly up from the 3.9 percent averaged during the same month a year earlier.

USA: EXISTING HOMES SALES DOWN
Lawrence Yun, NAR chief economist, says closings inched backwards in June and fell on an annual basis for the fourth straight month. “There continues to be a mismatch since the spring between the growing level of homebuyer demand in most of the country in relation to the actual pace of home sales, which are declining,” he said. “The root cause is without a doubt the severe housing shortage that is not releasing its grip on the nation’s housing
market. What is for sale in most areas is going under contract very fast and in many cases, has multiple offers. This dynamic is keeping home price growth elevated, pricing out would-be buyers and ultimately slowing sales.” The median existing-home price for all housing types in June was $276,900, surpassing last month as the new all-time high and up 5.2 percent from June 2017 ($263,300). Unsold inventory is at a 4.3-month supply.

A new generation of local up-and-coming chefs gained valuable hands-on experience in the kitchen this summer at the Culinary Boot Camp held at the Bonita Bay Club in Naples, Fla.

Under the guidance of Richard Brumm, the Bonita Bay Club’s Executive Chef and Director of Culinary Operations, the club’s Boot Camp program is in its third year of partnership with the local Estero High School’s Culinary Program and its Chef Instructor, Jeremy Jasper.  Estero High School Culinary Program students Freddy Figueroa, Amy Hallifax, Kaitlyn Jacobson and Angel Jimenez were selected this year to participate in the intensive experience that is designed to deliver a snapshot of life as a professional culinarian.

Over four six-hour days, Brumm and his team of sous chefs introduced the students to practical kitchen-management skills, such as ordering, receiving and sanitation, before progressing to sauce work, vegetable fabrication, garde manger and platter creation. Students also learned the basics of seafood, poultry and beef preparation.

The participating students quickly realize that working in a professional kitchen is different from what they may have seen on the Food Network, Brumm says-and the Boot Camp is a great way for them to gauge if the profession is the right fit for them.

“Now, they can see firsthand what working in the field is like, and learn what to expect in terms of career progression,” Brumm notes.
In a challenging labor market, the Culinary Boot Camp also helps the Bonita Bay Club identify and develop new entry-level talent-and in fact, three students who have participated in the camp’s inaugural year were then offered full-time positions and have been part of the club’s culinary team for two years.

This year’s Boot Camp culminated with the club’s traditional Friday-night buffet. After helping to prepare a Creole-themed dinner for club members, complete with gumbo and red beans, the students received a certificate of completion and a professional chef’s knife to start their personal collection.

One of this year’s participants, Amy Hallifax, especially liked creating the cheese platter for the member event. “Assembling it all by ourselves was really cool,” she said.

Even after the Culinary Boot Camp is complete, Chef Brumm offers guidance to students who are continuing their culinary studies. This year, he helped to coordinate an internship with a Certified Master Chef for a former Boot Camp graduate who is currently enrolled at the Keiser University Center for Culinary Arts in Sarasota, Fla.

“We’re so happy to be able to help cultivate that talent at Bonita Bay Club – it’s truly rewarding.”

We are now more than half way through the year. This is always a good time to take a look at what kind of year is unfolding. I always like to see a trend-line that is going up each month for pending and closed sales. That is not the case this year. We get one strong month and then the next month there is a slight pullback. The numbers are bouncing around a bit from month to month.

Downing-Frye has closed more than 1,800 transactions, so far, for the year. Listings continue to hold strong with 1,096 Downing-Frye listings at the end of June.

Exterior Projects that net you cash. 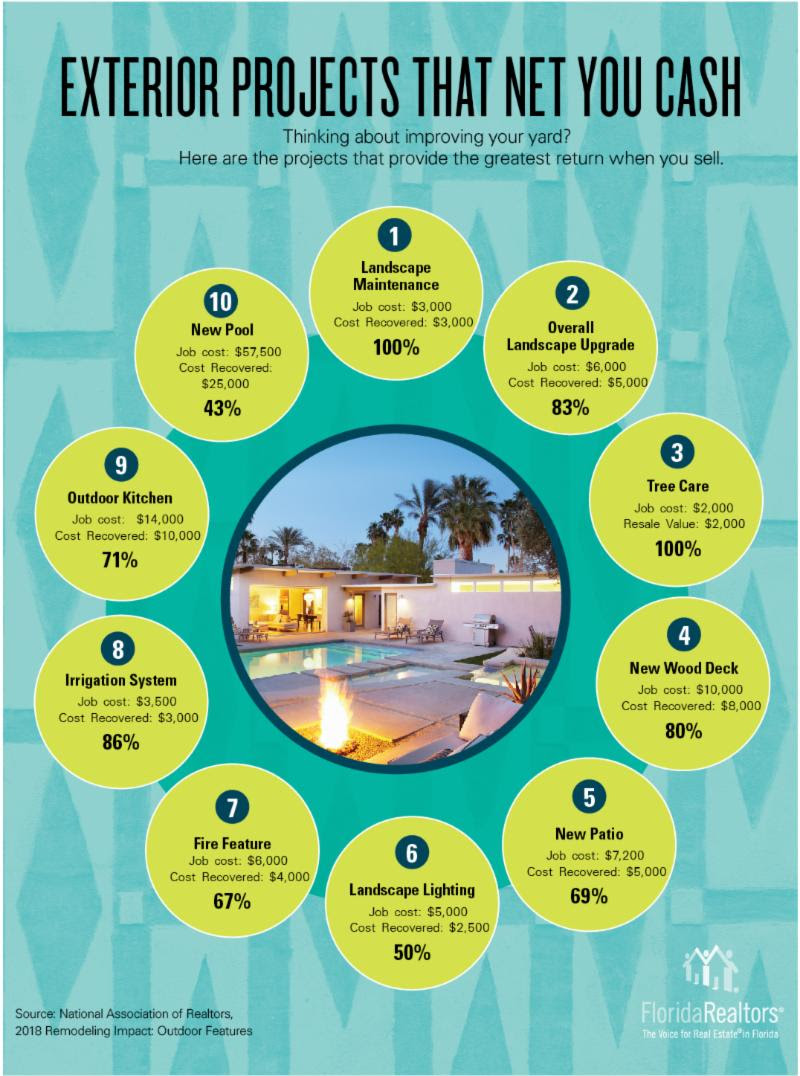