“We hit two milestones in August,” said Mike Hughes, General Manager for Downing-FryeRealty, Inc. “We now have over 2,000 closings for the year, and we hit the one billion dollar mark in closed sales volume. While it has been a bit challenging this year, we are carving out another solid year for sales. We should close 2017 with over 3,000 closings. One key is our solid listing inventory of over 1,000 available properties. We continue to carry one of the largest listing inventories in Southwest Florida.”

BONITA /ESTERO: MORE SALES THAN LAST YEAR
Pending units have increased overall by 10 percent in the 12-month ending July 2017 vs. July 2016. “The 12-month year over year increase in pending units is most likely due to the number of price decreases we saw in July 2017,” stated Jerry Murphy, Managing Broker, Downing-Frye. “Those price decreases are now producing offers.” In July 2017, there were 260 price reductions in the Bonita Springs and Estero markets. For the 12 months ending July 2017 there were 3,118 pending sales, 3,086 closed sales and an inventory of 1,440 units, representing a 6.8 month supply. The median closed sales price was $295,000.

USA: EXISTING HOME SALES SLIDE A BIT
Lawrence Yun, NAR chief economist, says the second half of the year got off on a somewhat sour note as existing sales in July inched backward. “Buyer interest in most of the country has held up strongly this summer and homes are selling fast, but the negative effect of not enough inventory to choose from and its pressure on overall affordability put the brakes on what should’ve been a higher sales pace,” he said. “Contract activity has mostly trended downward since February and ultimately put a large dent on closings last month.” The median existing-home price for all housing types in July was $258,300, up 6.2 percent from July 2016 ($243,200). July’s price increase marks the 65th straight month of year-over-year gains.

The award-winning Ronto Group announced that construction of the 26-floor, 120-unit Seaglass high-rise tower being built by Ronto within Bonita Bay continues to progress on schedule for top-off in October. The luxurious tower is expected to be completed and ready for occupancy by next summer. Ronto also expects to have fully-furnished designer decorated models open by fourth quarter of this year. Sales contracts worth nearly $135 million have been processed. The building is now more than 60% sold and purchase opportunities are becoming limited on several floors. Just one residence remains available on floors eight, ten, and 19 and two residences are available for purchase on floors seven, nine, 11, 15, 20, 21, and 22.

Seaglass contractors BCBE Construction, LLC and Stiles Construction reported the first pour of concrete on the building’s 25th level was completed last week. Kitchen cabinetry, an elaborate ceiling detail, and laundry room appliances have been installed in the 306 residence that will be featured as one of three furnished models and preparations are being made to install the unit’s wood flooring. Installation of kitchen appliances, countertops and tile in the level three and four residences is underway and the primer paint coat has been applied to the covered terraces. Crown molding has been installed on levels eight and nine. Primer coat painting has started on level 10. Work is also progressing on the upper floors. The ceilings have been framed on level 15 and ceiling framing continues to progress on level 16. Windows are being installed on levels 17 and 18. Wall framing is nearly completed on levels 16 and 17 and has started on level 18. Masonry work is progressing on level 19 and has been started on level 20.

Seaglass is situated just 600 feet from Estero Bay, making it one of the closest to the water’s edge of the high-rises under construction on Southwest Florida’s Gulf coast. All new open-concept floor plans with tall ceilings take full advantage of spectacular mangrove, water, and sunset views. Seaglass offers brand new, fully-completed, and ready-for-occupancy residences with designer-selected premium finishes, including flooring, paint, and trim. The space sequences and components found in the kitchens and master baths of the residences will reflect the contemporary flair found in the building’s architectural style. Each residence comes with two protected access under-building parking spaces. Private enclosed two-car garages are available.

With construction progressing at a rapid pace, future residents are encouraged to visit the Design Studio located in the Seaglass Sales Center at 26951 Country Club Drive within Bonita Bay. Ronto’s Finishing Touches Program allows future residents to select finishes for their new home’s flooring, cabinetry, countertops, door hardware, plumbing fixtures, and paint colors. A fully-outfitted kitchen featuring the finishes and Thermadore appliances available at Seaglass is included at the Design Studio, as well as stone, porcelain, and wood flooring and carpet selections; granite, marble, and quartz countertops; decorative backsplash choices; trim, doors, faucets, and plumbing fixtures; and a gas grill. Future residents are invited to meet with the Finishing Touches Coordinator at the Design Studio and to include their own interior designer in the Finishing Touches Program selection process. To ensure each residence is finished to each owner’s specific tastes, future residents may also specify finishes from other sources. The level of customization and flexibility available through Ronto’s Finishing Touches Program is seldom offered by high-rise developers in Southwest Florida. The Seaglass Design Studio and Sales Center are open from 10:00 a.m. to 5:00 p.m. Monday through Saturday, and Sundays from noon to 5:00 p.m. Selection opportunities are becoming increasingly limited as construction progresses.

All available penthouse residences within the Seaglass building are sold out. A choice selection of tower residences is available. Three luxurious Seaglass tower residence great room floor plans ranging from 2,889 to 3,421 square feet under air are priced from just over $1 million. The spacious tower residences will include dual private elevator grand foyers, large island kitchens, three bedrooms and three-and-a-half baths, or three bedrooms plus a den or fourth bedroom and three-and-a-half baths, walk-in closets in the owner’s suite, and sliders opening to multiple outdoor spaces that include a gas grill. Ten-foot ceiling heights are included per plan.

As evidenced by the exceptional sales volume processed to date, luxury homebuyers continue to be attracted to the unique value afforded by the Seaglass tower. Whether at the building itself, or by simply enjoying recreational possibilities available throughout the Bonita Bay community, residents at Seaglass will enjoy an amenity rich lifestyle. The Seaglass tower’s second floor will include a news café and connect to a spectacular, award-winning amenity complex previously designed by architect Santiesteban & Associates. An expansive array of amenities already in place includes a theater, guest suites, card and club rooms, a fully-equipped fitness facility that features men’s and women’s spas with steam and massage rooms, a large resort-style walk-in pool and spa, and a deck with a covered and screened cabana that includes a bar and grill.

With full golf and sports membership opportunities available, Seaglass residents will have access to the amenities available through the Bonita Bay Club. Recognized as one of the ten healthiest clubs in America by Prevo Health Solutions, Bonita Bay’s amenities range from a completed 60,000 square feet Lifestyle Center, to five championship golf courses, expanded tennis facilities, a full-service marina, numerous dining venues, a residents only private beach park, and a network of on-property hiking and biking trails. The prestigious America’s Healthiest Clubs award presented by Prevo Health Solutions is conveyed only to private clubs focused on the cultivation of a healthy environment and lifestyle for its members and staff. The new Lifestyle Center contributed to the Bonita Bay Club being named recipient of the award. The three-story Lifestyle Center includes a nearly 20,000 square feet world-class Fitness Center, a 9,000 square feet spa and salon, and the WAVE Café that serves healthy fast food, freshly made organic juices, and smoothies.

In addition to the Seaglass tower, The Ronto Group is developing Naples Square in downtown Naples, the TwinEagles gated golf course community, and Orange Blossom. A new project located on Central Avenue in downtown Naples is in development.

We have now closed over 2,000 transactional sides for the year and reach $1-billion in sales already this year. It’s been a little bit bumpy but the trend line looks good for a better year this year than last year.
Regarding local Hurricane Harvey relief efforts, Downing-Frye Realty will send more than 5,000 items to those affected by the hurricane.

10 Steps to a Smooth Global Transaction 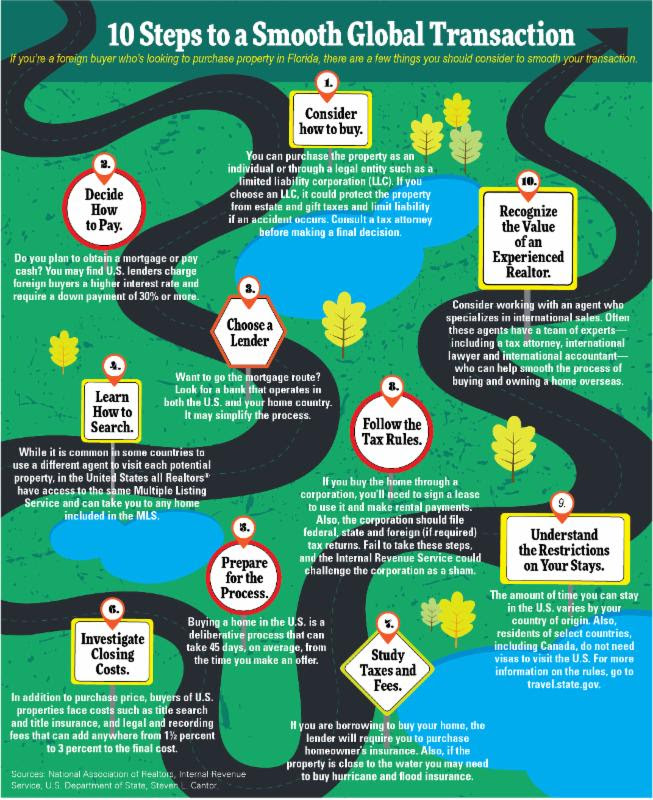